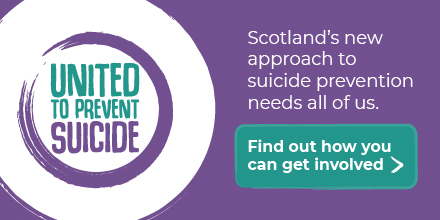 Working Together to Prevent Suicide

Pauline Toner, Glasgow City Choose Life Coordinator said: “We’ve recently been notified that Glasgow is the first local authority in Scotland to be designated a ‘Living Works Suicide Safer Community’ in recognition of the progress that has been made to reduce deaths by suicide. However, it is still the case that, based on 2018 figures, approximately two people die from suicide every week in Glasgow. Every one of these deaths is a tragedy. We must continue to build on our efforts with our partners across the city to further reduce deaths by suicide.”

Look out for the ‘United to Prevent Suicide’ movement - Scotland’s new approach to suicide prevention. This was launched across the nation on World Suicide Prevention Day, 10 September and included information on how we can all pledge our support and help to prevent suicide.

Also on 10 September, the International Association for Suicide Prevention invited us all to light a candle near a window at 8pm to show our support, remember a lost loved one, and for the survivors of suicide. Due to social distancing restrictions, a brief pre-recorded version of the annual ‘Candlelight Celebration of Life’ event - usually held in the Gartnavel Hospital's Tranquillity Garden on World Suicide Prevention Day was shared on social media.

Where to get help

If you are experiencing confusing or distressing thoughts, or if people around you have expressed concern about your wellbeing, arrange an appointment with your GP or phone NHS 24 on 111.

If it would help you to talk with someone, freephone:

If you, or someone you know, needs URGENT HELP please phone the emergency services on 999.